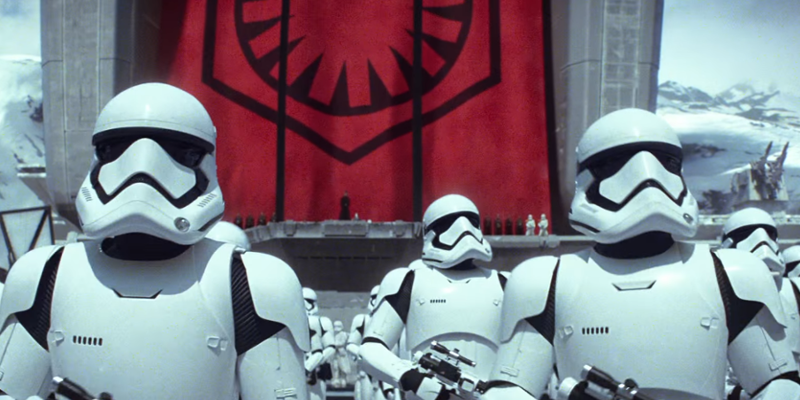 Since the decanonisation of the Star Wars Expanded Universe, we know next to nothing about how the Empire – and subsequently the First Order – creates its soldiers.

So with the release of Episode VII and our introduction to (darling, lovely, adorable) Finn, the question is begged: why does the First Order prefer stormtroopers to clones?

(Spoilers after the jump. You have been warned.)

While we first meet clone soldiers in Episode II: Attack of the Clones and then follow them in more detail in the animated series Star Wars: The Clone Wars, when – in the new Star Wars animated series, Star Wars: Rebels – we meet them most recently, Captain Rex, a returning character from The Clone Wars, implies that the clones are ‘a better class of soldier’ than the stormtroopers.

Certainly, it’s an old chestnut that the stormtroopers in the original trilogy can’t shoot for shit. It’s indisputable that the clones under the Republic were far more effective. So, in the transition from Republic to Empire, what changed?

All clones are brothers

The clones are grown on the isolated Outer Rim planet Kamino from the DNA of bounty hunter Jango Fett. They’re all physically identical, and raised together as soldiers.

In The Clone Wars, we see that they are explicitly trained to act within a unit. Squads made up of clones who are too individualistic to work together fail their tests and are relegated to maintenance duty, never leaving Kamino.

This doesn’t mean, however, that the clones aren’t individuals. Every clone we meet has a distinct personality and goes by a unique nickname, usually bestowed by another clone.

Nevertheless, the Kaminoan clones all look alike and call one another ‘brother’. One of the most moving scenes in The Clone Wars series occurs when two squads of clone troopers are duped into fighting – and killing – one another.

Arguably, the superior quality of the clone troopers is down to their cohesiveness in combat and out. The clones’ fraternal loyalty to one another enables them to act as one, anticipating and intuiting one another’s actions and working seamlessly within their command structure. Their feeling for one another isn’t a side effect of their origin, but their best advantage.

By contrast, we see no such fellow feeling amongst the stormtroopers of the First Order.

The First Order is no family

In his escape with Poe Dameron, Finn, firing the stolen TIE’s guns, takes out many of the troopers who until five minutes earlier had been his brothers in arms – without a moment of explicit remorse. As Finn and Poe make their escape, Poe asks Finn’s name – and Finn tells him that his designation, FN-2187, is all he’s ever been called. No nicknames for stormtroopers, one assumes.

We later hear that the mission with Kylo Ren on Jakku was Finn’s first mission.

Finn is no jaded old soldier. He’s only a kid, fresh off the First Order’s conditioning production line. But he turns his back on the First Order and his fellow troopers, the only family he’s ever known, without looking back.

The obvious argument is that, under the Republic, fraternal feeling amongst troopers was tolerated in a way the Empire – or its bastard child the First Order – never would. Where the Republic was lax, the Empire was brutally totalitarian.

At the Resistance base in the Ileenium system, Finn says that he was conditioned from birth to be a soldier – just like ‘all stormtroopers’. It’s anyone’s guess whether there’s a qualification to that statement. Is it all stormtroopers, or only all stormtroopers under the First Order, excluding the Empire? Certainly it’s possible that it’s just the latter; however, there’s no reason to rule out the former.

If this is the case, it’s not likely the Empire and subsequently the First Order could have failed to realise the military advantage of fielding an army of clones. Clones are far better at their job. So we have to assume the disadvantage must have been equal or greater in effect.

Better soldiers are harder to control

We see in that episode of The Clone Wars that the moment the clones realise they’ve been deliberately turned against one another is the moment they rebel against the Jedi general who engineered the ploy.

The clones’ advantage of loyalty and empathy makes them a formidable enemy in battle, and equally as formidable to whoever commands them. Although an army of soldiers that distrust and suspect one another is weaker, it is far easier to control.

Is this enough of a reason for the Empire and the First Order to ditch the obviously superior clone army?

Maybe it’s simply cheaper to abduct and condition toddlers, and the cost factor outweighed the advantages of clones. Maybe the Kaminoans unexpectedly put up a fight. We can’t know right now.

But if the consequences of Finn’s defection ultimately bring about the destruction of the First Order, as they already have Starkiller Base, it’ll be pretty damn ironic if I’m right.