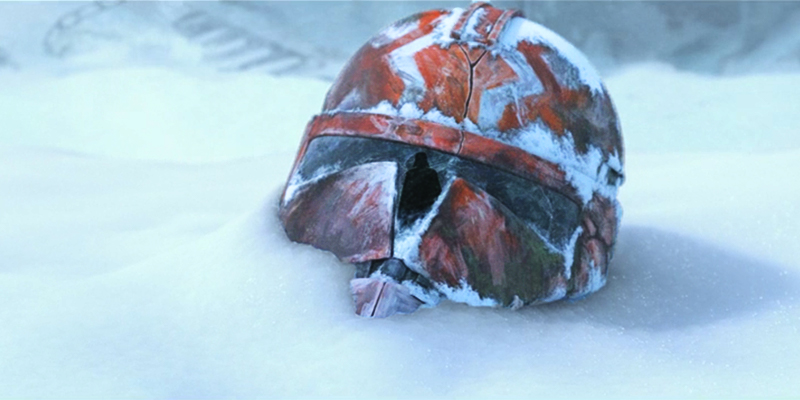 The Clone Wars is finally over, and it’s been an emotional rollercoaster. Honestly, this show’s final season has cemented its place in my heart as my hands-down favourite piece of Star Wars media ever. It’s better than any of the novels or comics I’ve read, and better than any of the films, even Empire Strikes Back or The Force Awakens (Episode 7 is fucking epic, fight me). To me, it’s perfect.

Though I knew what was coming, the last episode had me in tears. Order 66, the directive to the clones to kill all Jedi, has been the spectre that loomed over the whole series. But despite that, I somehow hadn’t expected the show to so tenderly break my heart into a million little pieces.

Because ultimately what TCW illustrates over its seven seasons is that the real tragedy of Order 66 isn’t about the fall of the Jedi, but that of the clones.

(Don’t click through if you don’t want to be spoiled for basically all of The Clone Wars, but especially season seven.)

Created and trained on the distant and secret world of Kamino by the eerily clinical Kaminoans as a convenient army, the clones are an engineered race who are born, live, and die all for the Galactic Republic. From the moment of their discovery by my favourite well-meaning idiot, Obi-Wan Kenobi, the clone project is helmed by the Jedi Order in their role as commanders of the Republic’s military. The clones are designed to be brave, obedient, loyal soldiers. Mutations are carefully managed: if desirable, the soldier is deployed to be made use of; if not, well, janitorial duty is the best a clone can hope for.

The clones are pitted against the Separatist army, an overwhelming force of battledroids. But unlike the droids, the clones aren’t machines. (There’s more to be said about droids, but that’s for later.) While they were only background in the films, TCW zooms in to show us that every clone is an individual, from rank and file soldiers like Echo and Fives to specially-bred clone commanders like Cody and Wolffe. While the Kaminoans refer to the clones only by their designations—CC-2224, CT-5555, etc.—the clones adopt their own names, chosen by themselves or their brothers. Each clone’s personality is unique, even as they march in lockstep.

So the big picture is cut-and-dry dystopian. But TCW complicates things on a smaller scale.

The clones’ closest relationships are naturally with their brothers. But their next closest—as Fives says, their best friends—are their Jedi commanders. The clones feel real warmth, real affection, for their Jedi. Why?

It’s because the Jedi feel the same for them. Jedi generals are expected to command their clone troops responsibly, taking care not to throw their lives away—not to treat them like droids, but as men. The Jedi usually fight alongside their troops on the ground. They frequently put themselves at risk to save them. When the Order discover the real origin of the clones—commissioned by Count Dooku for purposes unknown but no doubt nefarious—they decide, instead of acting on the information, to trust their long-time comrades not to betray them. As Yoda says in season six, ‘Valiant men the clones have proven to be. Saved my life and yours they have many times. Believe in them we must.’

This is an idealised portrait of military command, but it still doesn’t elide the inherent injustice. Ultimately, it’s Jedi who decide where and how clone troops are deployed, not the clones themselves. The most senior clone is still subordinate to the most inexperienced Jedi padawan. As we see on Umbara in season four, a corrupt Jedi can abuse his command, and whether he simply doesn’t care for the lives of his troops or actively seeks their destruction is beside the point. There is no oversight, no authority, that can or even wants to call him to account.

For the most part, the Jedi and the clones are united by a bond of real trust and loyalty. But they’re part of a system that enables atrocities, and the Jedi show no interest in changing it. In season one, clone trooper Slick tells Rex and Cody that the clones are enslaved—and he’s right.

The majority of politicians in the Senate don’t see the clone army as a race of people but as a tool to protect the ‘real’ citizens of the Republic. Even for Padmé, far and away the most conscientious senator, the creation of clones to serve as soldiers for the institution she serves doesn’t seem to trouble her one little bit.

And the Jedi Order, who should have been the moral backbone of the Republic, are blinded by their desperation to defeat the Sith threat. Instead of opposing the exploitation of the clones, they embrace it.

That, in the end, is the Jedi Order’s fatal mistake.

The inhibitor chip, a bio-engineered device implanted in the brain of every clone, was explained to the Jedi as a way to control the clones’ more independent instincts. Supposedly the chip would keep them loyal and obedient, unlike their originator, the bounty hunter Jango Fett. It was true, in a way. The chip’s real purpose, as Tup and Fives eventually discovered, was to compel them to obey Order 66.

A device that explicitly enables mind control should have been the final red flag to the Jedi Order. Instead, they went along with it. In doing so, they failed the clones, and condemned themselves to extinction at their hands.

So much for the Jedi. But what about the clones themselves?

The end of the Clone Wars

Well, they die. Not all of them, not all at once. But the execution of Order 66 is the end of the road for the Grand Army of the Republic as it was during the Clone Wars.

Not long after the Empire seize power, they halt for good the creation of clones at Kamino. The war is over, and the clones aren’t needed any more. Due to the rapid aging process engineered into clones—to get them battle-ready in as short a time as possible—it’s likely that by the time Darth Vader finds the remains of the crashed Star Destroyer at the end of TCW, most clones are either retired or dead.

The destruction of the Star Destroyer and the deaths of the 332nd Company aboard it are symbolic of the end of the clones as we knew them. The clone army of the Republic passes into legend alongside the Jedi Order they served.

But the Jedi get remembered. The Jedi get to be heroes again. Whereas the only ones who’ll remember the clones as they were—as they really were, in life, in battle, and in death—are the clones.

(And Ahsoka, of course. Growing up in the thick of the war, Ahsoka’s more like the clones than the Jedi in many ways. This is the unspoken background to Rex and Ahsoka’s conversation on their way to the Siege of Mandalore when they talk about both of them being soldiers. Which is why it’s so right that she’s the only Jedi—though not really a Jedi any more, which is meaningful in itself—to not only survive but to save a clone.)

One of the final shots of the final episode of TCW pans slowly across the graves of the 332nd Company, their distinctive helmets on stakes above them. Whether or not you think it was past time for the Jedi Order to fall (perhaps), whether the Jedi deserved what happened to them (I don’t think so), or whether they brought it upon themselves (oh, absolutely), what TCW puts front and centre of its tragedy are the clones themselves.

That’s the story of The Clone Wars that Dave Filoni and his team worked so hard over so many years to tell. The Clone Wars gives the clones the very least they deserve: they get to become a part of the Star Wars story.

My life in lockdown