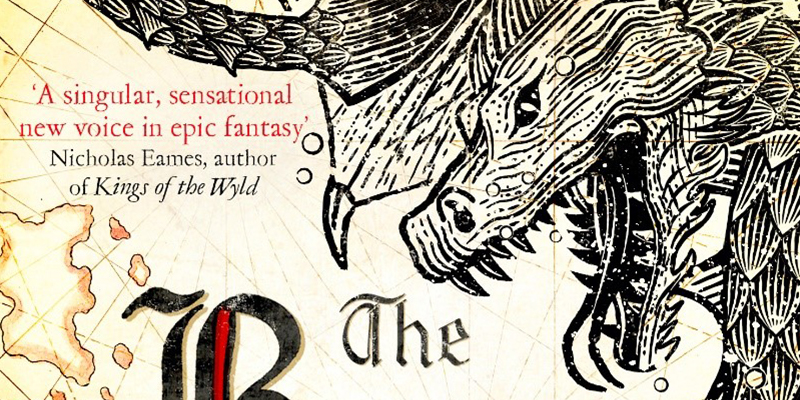 Arakeesians—sea dragons—haven’t been seen in the Hundred Islands for generations. The Hundred Islands fleet—at war with the Gaunt Islanders—must make do, building their ships from the dwindling supply of dragonbone that remains. Joron Twiner is the young, drunkard shipwife, or captain, of a black ship: a ship of exiled criminals. Following the death of his father and his condemnation, he sees no reason to live. When Lucky Meas Gilbryn robs him of his position and makes him a part of what is now her crew, he nurses a bitter resentment even as she steers him through rebuilding his life. And under Meas’ command, Joron Twiner will become part of a budding legend.

A reimagining of maritime culture

The genius of the novel is the way Barker constructs his sea-faring culture. As a fan of tall ships and stories about them, there’s so much that’s familiar to me—but not one thing is the same in Barker’s world as in ours. There are ships, yes, but made of bone and slate, not wood. The masts are spines, the aft deck is the rump, sailors are deckchilder and the captain is the shipwife. Sails are wings, and ships don’t sail—they fly. (The most jarring thing for me, maybe surprisingly, is how odd it feels to think of a ship as a ‘he’ instead of a ‘she’.)

Lest it sound like the maritime culture of Barker’s novel is a find-and-replace job, there’s plenty of material that’s original to the Hundred Isles. The most obvious detail is the heart of the story.

Arakeesians—sea dragons—are the missing heart of the islanders’ culture. Their bones build islander ships and their loss from the world has left the islanders scrabbling to salvage everything they can of their remains. The Hundred Isles are a society in decline, as rotten as brown arakeesian bone.

The depth of lore surrounding the bone ships feels fathomless, and, because of that, so real. What’s more, it is so inextricably linked with the broader society and culture of the Hundred Isles, which is itself fascinating.

The Hundred Islands’ society unfolds itself slowly to the reader. There are no exposition dumps in this novel—you get scraps of world-building, and you’ll be grateful, and you’ll add them to your carefully hoarded store and think about what this new piece of information means for the shape of the world.

What it means, eventually, is a decaying civilisation at perpetual war, in which the sexist presuppositions we take for granted in this world are turned on their head.

In a world poisoned by the death of arakeesians, not many children are born without birth defects, and not many mothers live through childbirth. Mothers who give birth to ‘whole’ children and live through it, along with their children, are raised to the title ‘Bern’. The Bern are at the top of Hundred Isles society, safe and treasured. They are given their pick of the Bern men called ‘Kept’, whose only purpose is to give Bern women children.

The ruler of the Hundred Isles is, currently, Thirteenbern Gilbryn. Her authority stems from the thirteen children she’s birthed, and when we meet her in person we see that she wears her stretchmarks and her sagging breasts with pride, as the signs of triumph they are. Everything our society scorns in a woman is valued here in the Hundred Isles.

But that doesn’t mean everything is all peace and love. Life in the Hundred Isles is cruel, made more so by the cruelty of the Bern. For example, all bone ships—except black ships—are adorned with corpselights: pretty little bobbing will o’ wisps that are bound to the ship they float above. To create a corpselight, a child must be sacrificed—specifically, every firstborn Bern child.

It’s the cruelty of the Hundred Isles that put Joron Twiner where he is at the beginning of the novel, along with Lucky Meas, his new shipwife.

Our shipwife for the momentous voyage in this novel is the daughter of Thirteenbern Gilbryn: Lucky Meas Gilbryn. Meas is a captain right out of the storybooks—she’s inscrutable; she’s preternaturally suited to command, knowing the sea and the ship and just how to use both, including the people aboard; and she’s driven as a motherfucker. She will sail her ship into the teeth of hell to accomplish her ends, and expect no complaint from her crew, who owe her nothing less than their lives and their deaths.

Lucky Meas is a towering figure of a captain, perfect to lead a story like The Bone Ships. Like Joron Twiner, I found myself drawn to her, fascinated by her, even inspired by her.

A sea story through a funhouse mirror

I was primed to fall in love with The Bone Ships. Like RJ Barker, I’ve adored the Patrick O’Brian and CS Forester stories of tall ships and naval battles since I was young. Barker manages to lift the pulse-pounding, dopamine-flooding feeling of those stories wholesale even as he shifts the ground under you. The culture and the setting of The Bone Ships could hardly be further from that of O’Brian and Forester’s stories, but the atmosphere is the same. Even as Barker focuses the lens on the cruelty and the fatalism of the Hundred Isles and their fleet, I still wanted to be on the deck of the ship Tide Child alongside Lucky Meas and Joron. I’m already desperate for the sequel.

And where’s my fancy, black-edged, signed, hardcover copy to treasure forever, eh? Shut up and take my money, Orbit!