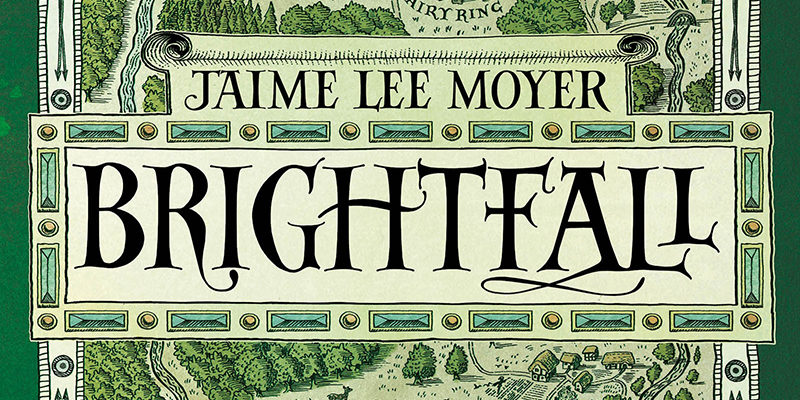 In Jaime Lee Moyer’s new novel Brightfall, the woman previously known as Maid Marian is a hedgewitch. What’s more, she’s a hedgewitch of rare talent and training. And all her skill will be needed when word reaches her that Robin Hood’s gang of Merry Men—now more than ten years disbanded—are dying in mysterious circumstances. What’s worse, an innocent six year-old boy has been killed too.

As a member of the once-vibrant fandom for the BBC’s late Robin Hood TV show, this novel brought up a lot of feels for me. I still eat up anything to do with Robin Hood like an ice cream sundae, so I was excited to get my hands on a review copy for Brightfall. And imagine my delight when I discovered it was all about Marian—and not only that, but that Marian was a badass witch.

In Moyer’s novel, it’s been over ten years since the Merry Men ceased their outlawry and went their separate ways. Marian is the only one who remains in Sherwood Forest, living alone in a cottage deep in the woods along with her twin children, Kate and Robbie.

The twins’ father is Robin of Locksley, Robin Hood that was, but he didn’t stick around to see them born or raised. Marian’s sole comfort and lover these past twelve years has instead been Will Scarlet, Robin’s brother in this story.

It’s so refreshing to see not only a protagonist who’s a single mother, but one who is a woman as nuanced and rich with interior life as Moyer paints Marian.

Of course, of course Marian’s prime motivation is the safety of her kids—but she has other worries too. The loss of her partner, Will, weighs heavy on her, as she refuses to banish his shade from haunting her. She cares, and cares deeply, for the others who cross her path. And she has difficult decisions to make on her quest to discover who is responsible for the the curse that is killing Robin Hood’s old associates.

A journey through medieval Nottinghamshire

Said curse is Marian’s impetus to leave Sherwood and her children behind and light out on the road. But she’s not going alone. Big-hearted Father Tuck saddles her with a protector—and it’s none other than Robin of Locksley himself. And my goodness, he’s an absolute wanker.

Luckily, Marian collects other companions along the way. And her tour through Nottinghamshire and beyond is downright fascinating. The history in Moyer’s novel feels so rich it seems to bubble up from the page. The Roman occupation is fresh on the land, ghosts of the time haunting Marian on her journey. And more recent events have taken their toll—Richard the Lionheart’s Holy War and its tithe of young men, and his brother John Lackland’s penchant for hunting and carousing in Nottinghamshire have both had their effects on the countryside and on the characters.

The real enemy is a man’s irresponsibility

If Marian is the heart of Brightfall, noted tosspot Robin of Locksley is the key to the story. I don’t want to say too much, but I will say that while Marian is striving to uncover the secrets and hurts that led to the vengeance being enacted on her erstwhile friends, Robin, her reluctant guardian, seems invested in keeping quiet.

I spent much of the book wondering when Robin was going to step into the limelight and reveal his motivations for being quite such a heel. (As I said, the Robin Hood fandom had long-since biased me toward thinking of Robin as a total twat.) But I realised that that’s not the point. This story doesn’t belong to the famous Robin Hood—it belongs to Marian. So when its revealed that all of the mess they’re in can be laid at the feet of a man’s failure to face up to his responsibilities, it’s not him who’ll save the day—but Marian.

A bit fuzzy on the details

While I enjoyed Brightfall, after I closed the book (metaphorically—I’m using an eReader, of course) some questions remained. A lot happened during the events of the story—encountering friends old and new, saving people, failing to save people—and I was still thinking about them even as the story wrapped up.

The one at the forefront of my mind was about the nature of the curse. It’s hinted at early on that each of the victims of the curse died staring into a reflective surface. My mystery-solving brain went into overdrive, anticipating occult details about the way the outlaws died. But if that got confirmed, I don’t remember it.

There’s more. What happened to the kids in the baskets? They appear, we start to care about their fate, and a couple of pages later are gone, hand-waved away. And I’m still not clear whether a certain character was another’s consort or brother (or consort’s brother?), down to the awkward inability to use real names while the Fae are about.

Despite the occasional lack of clarity, I’d thoroughly recommend Brightfall for a fun, charming quest around ancient Nottinghamshire. It’s got many of the ingredients I love in a fantasy—a deep sense of place, a fleshed-out magic system, and a main character you want to spend more time with.

Thanks to Milly Reid from Jo Fletcher Books who organised a blog blast for this novel—go check out There’s Always Room for One More, Nick J Markus, Lynn’s Books, Books, Dogs & Cats, Fantasy Smorgasbord, Muse Books, Avid Readers’ Retreat, and Chrikaru Reads, who are all writing about Brightfall today!

The Heart of the Circle by Keren Landsman