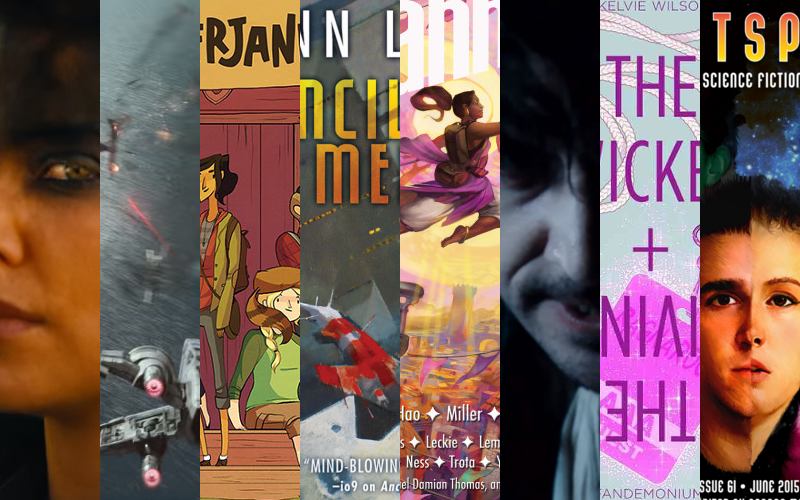 I have to admit, this was the stickiest category. 2015 has been an excellent year for comic books. Worse, I still haven’t read them all!

So, while honourable mentions go to The Wicked + The Divine, in which the dream team of Kieron Gillen and Jamie McKelvie tell a story of fandom, gods, glitter and blood, and Lando, my favourite of the new Star Wars comics, following the pre-Empire adventures of the smooth-talking rogue we all know and love, my favourite comic of 2015 has got to be Ms Marvel.

Ms Marvel, by G. Willow Wilson and Adrian Alphona, stands out as a great all-rounder and a comic – and character – with a hell of a lot of heart. Kamala Khan makes mistakes as she blunders through newly acquired superherohood alone, but she never stops trying to do good. (That Kamala finally gets some much-needed mentorhood is part of what makes the Wolverine arc so gleefully enjoyable. Also selfies.)

I’m a sucker for a period drama, and 2015 didn’t let me down. Runners-up include Poldark, the remake of the 1975 adaptation of the Winston Graham novels about a broke Cornish aristocrat’s traumatic adventures in love and tin mining (and vehicle for Aidan Turner’s newly legendary abs), and the BBC adaptation of Susanna Clarke’s Jonathan Strange & Mr Norrell, a sterling effort rich in both period and fantastic detail.

Despite the quality of these offerings, the TV show that sucker punched me and dragged me hopelessly in was the January BBC production, Wolf Hall.

Adapted from the internationally bestselling novel by Dame Hilary Mantel, directed by Peter Kosminsky and written by Peter Straughan, Wolf Hall follows Thomas Cromwell over six hour-long episodes in his deftly satisfying rise to power at King Henry VIII’s side.

Mark Rylance brings his subtly powerful stage acting chops to the role, embuing Cromwell with a humanity and wry humour that is impossible to fail to be endeared by. Plus, it’s hugely satisfying to follow a character whom you not only root for but, in the end, is capable of enacting vicious and apposite vengeance on those who cross him.

This was a close one.

Despite my new and passionate love for the most anticipated film of the year, Star Wars: The Force Awakens, even in the fresh blush of my fandom I still recognise Mad Max: Fury Road as the superior film. (Sorry, space!OT3.)

MM:FR is a film about survivors saving themselves and one another in a two hour dystopic future car chase that sends emotions hurtling from horror to glee in the space of one heartbeat to the next. Charlize Theron’s Furiosa is a shining avatar of rage and hope.

I hate car films. This isn’t a car film. This film is high-octane balm for your soul.

Madeleine remembers being a different person.

When it came to compiling my year’s best list for short fiction, I found Amal El-Mohtar’s stories dotted through it like raisins in a Christmas pudding. El-Mohtar is my favourite author writing short stories right now, and that’s saying something in a field as rich as SFF short fiction is at the moment.

Madeleine was published at Lightspeed Magazine as part of the their Queers Destroy Science Fiction! special issue.

The main character, Madeleine, is taking part in an experimental drug trial when she begins to experience memories that belong to someone else.

The prose is so quiet and so beautiful in that way of El-Mohtar’s, it’s like pleasant hypnotism to read. I listened to the audio version, and the ending made me cheer out loud in the supermarket. Read it, and then go read everything else by El-Mohtar you can get your hands on.

I’m not usually au fait with new science fiction and fantasy longform literature. I can barely keep from being crushed under my ever-encroaching TBR pile as it is.

But I read the first book in Ann Leckie’s space opera trilogy, Ancillary Justice, in 2014, and within pages fell in love. Upon completing it, I bought and devoured Ancillary Sword.

I nabbed Ancillary Mercy the day after its paperback release, and finished it, at first in fits and starts whenever I had a free moment, at last by marathon session under the duvet, by the end of the weekend.

Ann Leckie’s Ancillary trilogy follows Breq, a solitary remnant of what was once a massive AI with hundreds of human bodies at its disposal, through an interstellar empire ruled by an eternal dictator. While Breq journeys determinedly on through inventively alien cultures, we explore themes of colonial brutality, identity, individual responsibility, and how to love and live with other people when nothing is perfect or maybe even okay.

If the last paragraph makes the Ancillary trilogy sound heavy, it’s not. Leckie’s distinctive and layered characters leaven themes which in other authors’ hands could easily creep into grimdark. Breq, Seivarden, Ekalu, Awn, Tisarwat – even, or especially, One Esk – what makes the trilogy compulsive reading is the love these characters instil. As in the best fiction, I’d walk through fire just to spend a little more time with them.