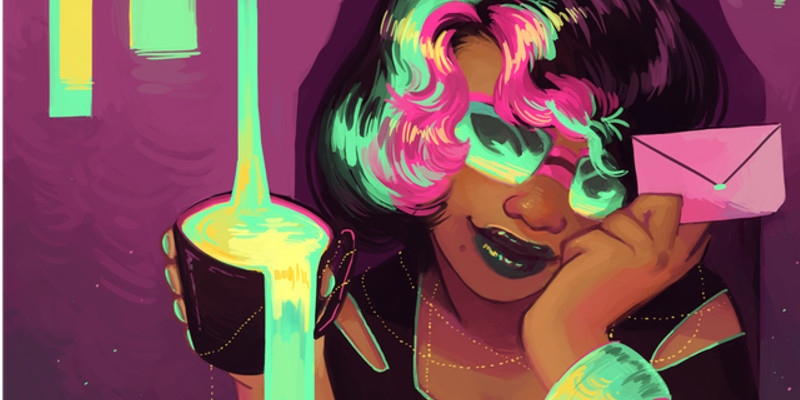 The second issue of FIYAH, a speculative fiction magazine publishing stories by black writers, dropped at the beginning of April. I’m lucky enough (thanks to @philmargolies on Twitter) to have a subscription. So find below the cut my overwhelmed and delighted micro-reviews of all the short fiction in the issue.

Click on any story in the table of contents to jump right to it; or just read on below the cut.

The issue kicks off with a small epic about Christian missionary space marines (a concept so genius and elementary I admire Broaddus’ clear sight) and their colonisation of an alien planet with its own culture and beliefs. It would be easy to make this too simplistic, but Broaddus instead invokes the complicated reality of colonialism by making the protagonist, Lieutenant Macia Branson, herself from a marginalised and colonised culture, not indigenous to the dominant Christian one, despite her assimilation.

The story tackles the violence colonisation provokes, and while recognising the legitimacy of the anger of those whose culture has been stripped and outlawed, also envisions a possible peace—not without loss—where both cultures mix and coexist syncretically. Broaddus paints this situation with sensitivity and realism. This story is beautifully turned, without an ounce of excess verbiage.

Talking to Cancer by Khaalidah Muhammad-Ali

Next up, Talking to Cancer by Khaalidah Muhammad-Ali—who as well as being an author is assistant editor at audio fiction magazine Podcastle—where the title really does describe the central conceit: there is a woman who can talk to cancer.

Layla makes her living asking cancer to stop killing people. Her latest client, Hiba, is a little different to the rest.

Around Layla and Hiba crowd Layla’s memories. Her husband, Moody, and their son, Abe. Their old next door neighbour. Layla’s mother. Layla’s power goes both ways: not only can she stop cancer, she can sic it on people, too. Everyone is affected by cancer in their lifetime, so it’s a familiar bogeyman. Layla’s power is terrifying.

How does a human—subject to human heartbreak and failings—live with such a power? It’s this Muhammad-Ali explores in this emotional deep dive of a story.

The Hard Shell by Russell Nichols

Following the first two, Russell Nichols’ The Hard Shell is a whiplash tone shift. A noir pastiche set in the land of nursery rhymes, it follows Humpty Dumpty, a washed-up private detective who must investigate the murder of the black hen Hickety Pickety.

The depth of reference and punnery in this story absolutely floored me. Nichols has created a nursery rhyme city state that’s knee-deep in clever twists on familiar stories. While I can’t say I didn’t see the final twist coming, this story is nevertheless a brilliant little thing that made me laugh out loud more than once.

The Beekeeper’s Garden by Christopher Caldwell

Christopher Caldwell’s The Beekeeper’s Garden is the story of a girl who has forgotten who she is, and who is trapped in the authoritarian saccharinity of an old white woman’s house and her walled garden.

Caldwell describes a miniature odyssey, rich with fabulist detail of flowers and bees. Mother Bea, the old woman who keeps the protagonist captive, is as frightening as the giant in Jack and the beanstalk. The story is laced with historically white supremacist aggression, from Mother Bea’s straightening the black protagonist’s hair to her re-naming her and stealing her memory of her real self.

This story keeps coming back to me in idle moments. Its colours, its scents, its flavours haunt me. It is an enchantment in narrative form.

A short, reflective piece follows: Home is Where My Mother’s Heart is Buried by Wole Talabi, in which a pair of sisters, émigrés from Nigeria on Earth to Mars, consider the idea of returning home again.

I loved the detail of this story. It cemented me in place: Tinu’s corrosion-shielded balcony in the Chang-Duong sector, drinking rooibos and watching the acid rain. The sensuality of this story, its sense of place, is the poetry through which Tinu’s internal journey is conveyed. Of all the stories in this issue, I think this quiet piece alive with emotion is my favourite.

We Laugh In Its Face by Barbara L.W. Myers

After Talabi’s relative optimism, Barbara L.W. Myers’ We Laugh In Its Face is a sinister-toned story about the invention of the cure for death. While the meandering retrospective viewpoint made the hairs rise on the back of my neck waiting for the inevitable bad news to drop (and it does), this story is also a perfect depiction of the total immersion in another person that intense friendship and love can enable. But, I mean, damn—this story made me sad.

The issue completes its roster with Eden Royce’s Graverobbing Negress Seeks Employment—the story of an old black woman who makes her living temporarily resurrecting the dead to reunite them with their loved ones. A deceptively simple story, it posits a power of some measure of redress against the wrongs committed against black Americans by white supremacy. Under the whites’ noses, Ms Prosper, the resurrectionist, returns the murdered to their families, for however short a time. This story is an attempted answer to too much death, though any answer to such a thing, however good it is, can only ever be insufficient, which it itself acknowledges. There’s little closure at the end of this story, only sorrow at its necessity.

With its second issue FIYAH continues to put out solidly complex and enjoyable speculative fiction from both newer and well-known black authors. I’m so damn glad to have a subscription in this, its first year.

Plus I can’t stop raving about the eye-popping gorgeousness of the cover art! I’ve seen three covers so far and HOLY SHIT JUST LOOK AT THEM. You can read their interview with the artist Geneva Benton at their blog.

Issue #3 drops tomorrow, July 1st. You can buy or gift FIYAH issues at their shop. I heartily recommend it!