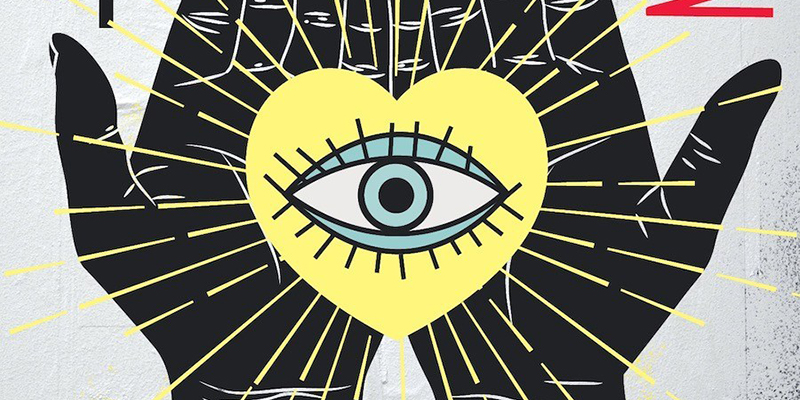 Keren Landsman’s The Heart of the Circle is set in a world like our own in which a fraction of the population are born sorcerers—people with extra abilities beyond the norm. Sorcerers are subdivided into elementalists and psychics—the former can control either air, water, fire or earth, and the latter are either empaths or seers. Empaths can feel and manipulate others’ emotions, while seers can see and manipulate possible futures.

The story takes place in present-day Tel Aviv, following Reed Katz, an empath, or ‘moody’ as the Israeli slang has it. Reed is not only a moody but a freelance ‘moodifier’, meaning he makes his living infusing art and literature with emotion—at least, when he’s not slinging coffees at the Sinkhole, a seafront cafe. The most important thing in Reed’s life is his best friend and roommate Daphne, a seer, or ‘damus’ (from Nostradamus, geddit?).

But life for sorcerers in Tel Aviv is getting more dangerous. While they’ve always been segregated from the normie population—different doors in public spaces and transport, separate areas and warning sounds—recently there have been a spate of killings targeting sorcerers’ protest rallies. And while the police stand by, the violence is only ramping up.

(If you’re wondering why I’m reviewing an Israeli book despite supporting the BDS movement, here’s the answer to that.)

Sorcery as a queer analogue

Landsman says in an interview that she was inspired to write The Heart of the Circle after a 16 year-old girl was killed at a Pride parade in Jerusalem. The queer analogue is certainly strong—sorcerers are treated as pariahs in every culture that’s mentioned in the book. What’s more, the main thread—the killings of sorcerers at protests—is itself wrapped around a queer love story.

However, it’s specifically because the story is a liberation narrative that I can’t help but take issue with the toothless rhetoric at its heart.

As I began reading The Heart of the Circle, I made some assumptions. The story is about members of a persecuted minority being targeted and murdered at demonstrations while they’re supposed to be protected by the police. Surely, surely, I thought, this book was going to contain a scathing critique of cops—cops at demos, cops at Pride, minority members of the force and the double-think that goes along with such opposing identities.

But I was wrong. The very worst thing you can say about the police force in The Heart of the Circle is that it’s ineffective. One of the main characters in the novel is Sherry, an earth elementalist as well as the cop heading up the investigation into the killings. While reading, I was always alert to the likelihood of her being corrupt, herself behind the terrorist attacks, but spoiler alert: she’s not. She is in fact presented as one of the most important and heroic characters in the novel. Even worse, Sherry’s politics are thoroughly assimilationist. She talks about how the onus should be on sorcerers to prove to ‘normies’ that they can be trusted, to earn their rights in society.

Which would be no more than I’d expect from a cop. But our main character, Reed, agrees wholeheartedly. The entire narrative places Sherry firmly in the right, never so much as questioning her or her ideas, even when they’re blatently bad, irresponsible, or plain old conservative.

As minority liberation narratives go, I don’t have much time for that. Not when we know cops deliberately allow killings of queer people to go uninvestigated. Not when we know how cops infiltrate and manipulate radical movements. In the whole messy history of human progress, when have the cops ever been on our side? (Hint: the answer is never.)

Another issue I had with The Heart of the Circle was technical: it simply dragged on too long. The plot’s not complicated—a community reeling from targeted murders on the one hand, a budding romance on the other. It should have been breathless, breakneck, alive with anticipation both good and bad. With the threat of death looming over our characters, extended scenes of TV watching and family dinners seemed to dissipate the tension and muddy the storyline.

Even when climactic events do happen, they don’t go anywhere. Just past the halfway point, a rally takes place. Everyone is on tenterhooks. Everyone’s preparing for a battle. But then the scene just… winds down. Nothing changes. We go back to limbo, waiting for the main event.

The love story at the heart of the book suffers from a similar problem. There are no real obstacles separating Reed and his love interest, so when they fall for one another, they hook up—it’s as simple as that. Since this happens early on, the events of the rest of the story are counterpointed by love scenes. While its nice to see a queer couple getting to be (more or less) happy, there was no growth, no achievement, and so the scenes felt meandering rather than vital parts of the book.

(I was, at least, happy to discover that this book does not Bury Its Gays.)

A fascinating but underused cast of characters

Don’t get me wrong—I love slice-of-life fiction. I grew up devouring fanfic alongside published fiction. I adore reading characters I love spending time with one another and connecting—or even disconnecting, if we wanna get sad on main—in meaningful ways.

And I did love these characters. Landsman really nails the vibe of a community of young people in an urban setting. I just wanted to see more significant interaction. I felt the choice of first person perspective led to too close a focus on Reed’s actions and Reed’s feelings, whereas I wanted to see more of Daphne, more of Matthew and Lee and even Sherry.

A promising idea, a disappointing execution

Ultimately, I felt like The Heart of the Circle could have been a lot better. The central conceit, of sorcerers as an oppressed demographic, has hella mileage. Tel Aviv as a setting was a delight to read. But the opportunities to really lean into the themes of the novel seemed to be missed. I followed Reed all the way to the end of the story because I so wanted to know what happens to him, because I did genuinely care about the characters in this book—and I was somewhat disappointed.

The Heart of the Circle is out now from Angry Robot. You can buy it from them, from your local independent bookshop, or ask about it at your local library.