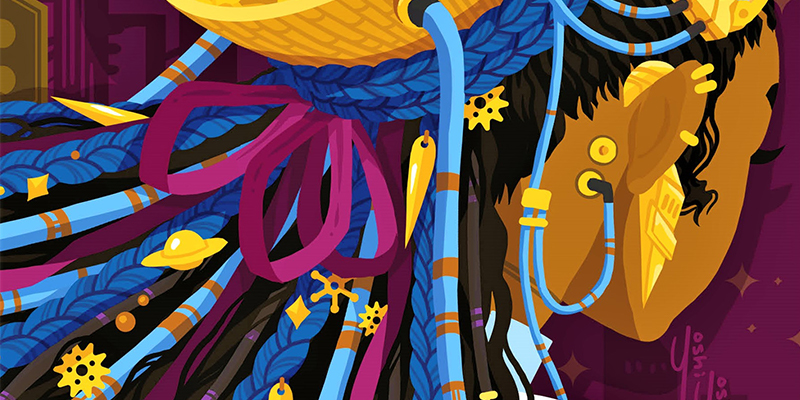 New Suns is a collection, drawn together and edited by the legendary author and editor Nisi Shawl, of stories by authors of colour. It opens with an epigraph from Octavia E. Butler:

“There’s nothing new under the sun, but there are new suns.”

This collection is a journey into different worlds under different suns—worlds drawing from, to some degree or other, the histories of peoples other than the western WASPish hegemony.

The short stories here are as varied as their authors, from ‘Burn The Ships‘, Alberto Yáñez’ eviscerating account of a people’s overcoming their Holocaust by means of forbidden magics, to Minsoo Kang’s ‘The Virtue of Unfaithful Translations‘, a pseudo-historical account of a pair of translators that prevent a bloody war between their nations. A woman loses her belly fat in the woods in Hiromi Goto’s ‘One Easy Trick’, and in Rebecca Roanhorse’s ‘Harvest’ a Native woman in New York City falls for a deer woman who convinces her to commit murders.

The thread in this collection is diversity. You step from one story to the next and you never know where you’re going to end up next. It’s a scintillating experience of an anthology.

That said, there are themes that crop up more than once. The weight of history lies on some of these stories, and their characters navigate their minefields in their own ways. Closest to our own timeline, Steven Barnes’ ‘Come Home to Atropos’ is a story that takes the form of advertising copy for a Caribbean island called Atropos, targeting euthanasia tourism at white people—it’s a deeply uncomfortable story because of the language it uses, and it’s meant to be.

’The Fine Print’ by Chinelo Onwualu features a man rebelling against the powerful djinn and its corporation that rules his unnamed African country through consumerist wish-fulfilment. The djinn is a successor to and in many ways a symbol of the colonialist state that the people were subject to. It’s a critique of 21st century corporate enslavement as well as the white supremacy that the djinn replaced.

In Tobias Bucknell’s opening story, ‘The Galactic Tourist Industrial Complex‘, we’re thrown into a New York City full of flying cabs and alien tourists, but the inequality remains the same. Our cab-driver protagonist Tavi lives out near Queens in a falling-down apartment building kept running by its inhabitants, while only the ultra-rich and the galactic tourists can afford to stay and play in Manhattan.

One of my favourite stories in the book continues the theme. Karin Lowachee’s ‘Blood and Bells’ collapses the distinction between city gangs and distinct nations, so that in her city of Emidit the streets are divided into national territories and ruled by shifting allegiances. There’s still a ruling class here with the police in their pocket, and the divisions between the nations make life in Emidit into a matter of staying within your own boundaries.

Something that many of the stories in the collection share is the hope they invest in the future. That hope takes different forms.

Kathleen Alcalá’s story ‘Dear Dancer’ depicts a post-climate-apocalypse north America where inequality and scarcity still shape the world, but the communities that live on society’s fringe are free to make their own family and live peacefully, practically, and love and support one another. Andrea Hairston explores a similar world in her story ‘Dumb House‘.

An interstellar future features in Indrapramit Das’ ’The Shadow We Cast Through Time’, in which another kind of quiet societal collapse occurs: a planet’s colony loses touch with the wider galactic society. The community finds themselves left alone with the creatures—the demons—that inhabit their planet. The oppositional relationship to the demons that the name implies is part of the twist—the demons represent a new way of life, a nature beyond human—post-human even—and the possibility of radical change.

A collection as diverse as its contributors

There’s no single theme you can pin on this collection. Instead, ideas surface and resurface, worlds spin by in a dizzying, fascinating parade. I can’t possibly do justice to every story in this collection. If you want to read a rich and satisfying offering of speculative fiction from authors of colour gathered and edited by an absolute legend of SFF, then please look no further than New Suns.

New Suns is out now from Solaris Books, and you can buy it DRM-free straight from the Rebellion Publishing store, or ask about it at your local library.