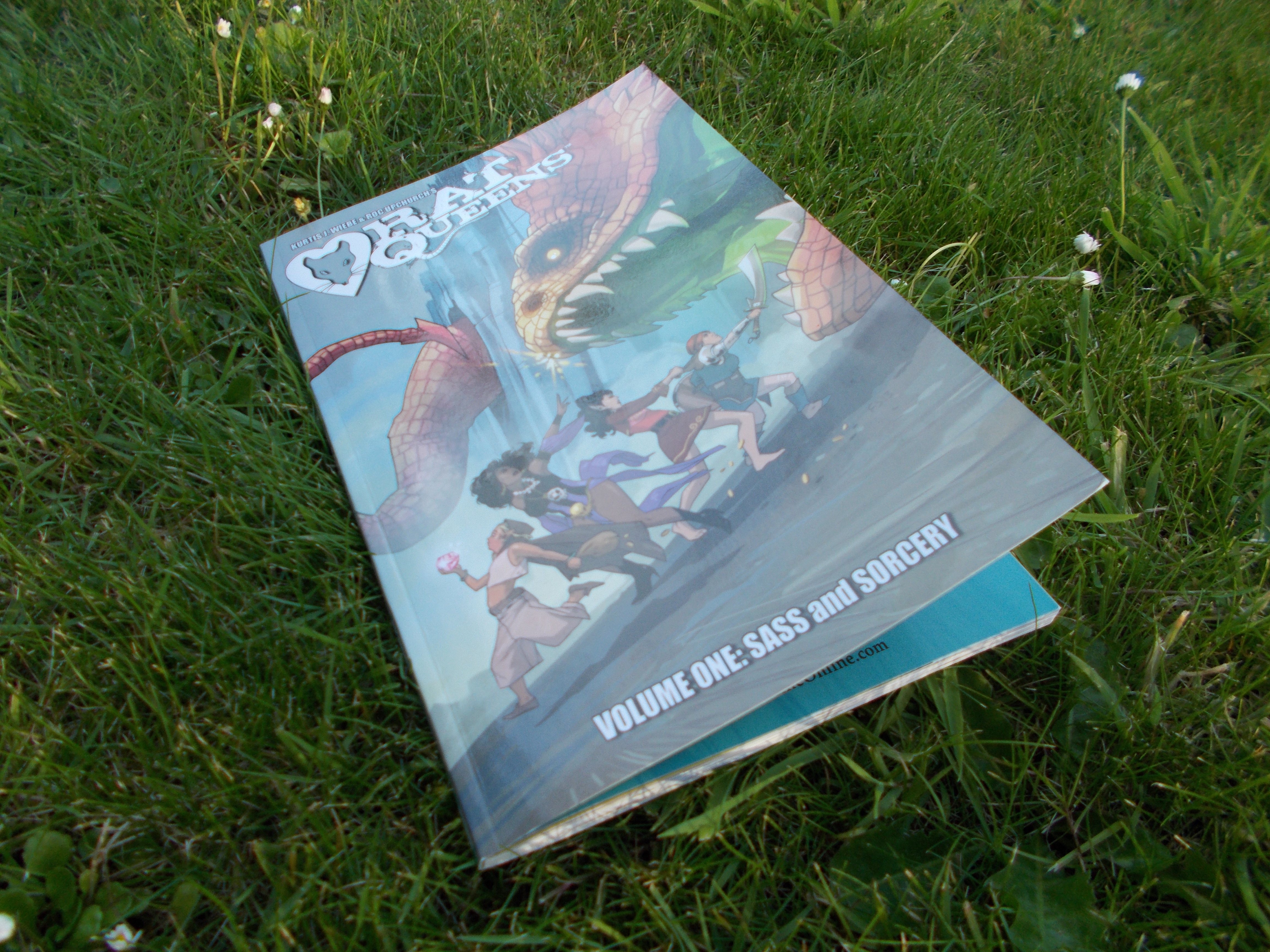 Writer Kurtis Wiebe describes Rat Queens as “a comic series that follows four lady legends waist deep into rivers of blood in the endless quest for gold, guts and grog”. Readers will find this a perfectly apt description, as they follow adventurers-for-hire Hannah, Dee, Violet and Betty – a.k.a. the Rat Queens – as they crash onto the scene and then continue to wreak mayhem and murder around fantasy city Palisade and its environs, and across 130 pages.

Wiebe’s story marries a traditional sword-and-sorcery fantasy setting with a modern alt-culture sensibility. The Rat Queens are Hannah, a rockabilly elf mage; Violet, a hipster dwarf warrior (who only drinks wine and who shaved her beard before it was cool); Betty, a dreadlocked, mushroom-chomping hippy, a thief, and a smidgen (the comic’s analogue for halflings); and Dee, an ex-cultist from a Lovecraftian horror-worshipping religion, an atheist cleric, and the only human of the group. As well as killing things for money, they swear, fuck, get high, and generally act like any real group of four urban twenty-somethings.

The story begins, of course, with a quest, and from then on in the plot trots along pacily, snowballing naturally toward a dramatic climax. The Rat Queens themselves are immediately loveable: badass and hilarious, vulnerable and defiant, you’ll recognise them immediately. A roster of well fleshed-out  incidental characters populates the world around them. In this comic, no one is boring.

Upchurch’s gorgeous colours and expressive linework are always easy on the eyes, with a particular flair for body language and facial expression (oh, the expressions!). This contributes particularly to the distinct nature of each character – there’s a few of ’em, but you never have to look twice to figure out who’s who. The panel layouts, too, are dynamic without being unintuitive.

Rat Queens was always going to hook me, because it reads as if Wiebe wrote a comic straight from the most jealously cherished dreams of my soul. But aside from being my personal wish fulfilment, the comic is also just damn good fun. The modern idiom and the foul-mouthed wit play perfectly against the absurd fusion of traditional fantasy and everyday characters. Making it even better, it’s a comic about badass ladies, both in the team and outside it, without being precious about being about ladies (same goes for queer representation, too).

Altogether, Rat Queens is a bright, lively and funny new series, sure to appeal to anyone who has ever played anything with a die with more than six sides, as well as anyone with so much as a shred of a sense of humour. Not to mention that the comic is being adapted into an animated TV series already. Get on board the Rat Queens train, losers, we’re going to slay goblins!

Buy Rat Queens Vol. #1 now at Comixology (for a digital copy) or Amazon (a physical one).