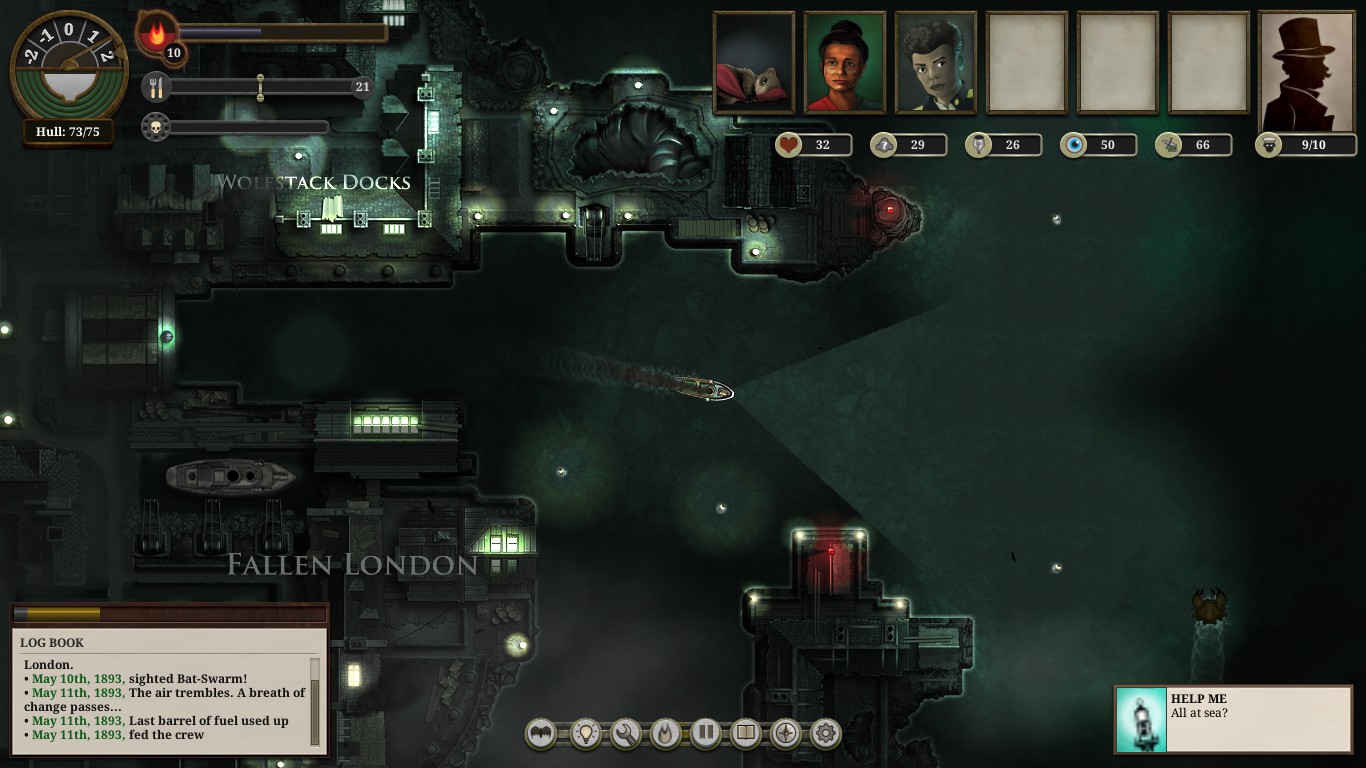 Back in September of last year, I made a post here urging everyone to sign up to fund the Kickstarter from little-known London game developers Failbetter Games for a gothic fantasy Roguelike nautical exploration-and-survival game, a spin-off from the popular browser game Fallen London. That game was Sunless Sea. Now, having surpassed its initial funding goal and first bonus goal, the game I’ve been waiting all year for is at last in my sweaty, over-keen grasp.

Sunless Sea is set in an alternate Victorian era, in which decades previously London was ‘stolen’ down into an abyss beneath the surface of the world known as the Neath (not to be confused with Neath, West Wales, which is lovely and  mostly not a terrifying realm of endless midnight). London now sits on the shores of the Unterzee, a vast subterranean ocean sunk in never-ending darkness upon and under which pirates, albino eels, giant crabs and other horrors roam in the darkness.

You, the player, have a ship and a crew. Your job is to stay alive.

The game is still in early access and will be until late September, meaning that the game in its present form isn’t entirely the game as it will eventually cohere as a final release. Failbetter is keeping us up to date with what is and isn’t yet finished with the progress page on the game’s website gives percentages, aspects, illustrations and predictions.

The most noticeably unfinished aspect of the game right now is the map. Though the player can roam wherever they choose, only a small area of what will be the finished world is currently strictly playable. The large majority of the Neath is as yet blank land and empty water. Nevertheless, I haven’t found this too restrictive yet. I’ve been playing Sunless Sea for just over a fortnight – as long as it’s been available on Steam – and although I’ve died seven times, I’m still only barely grazing the edges of playable world.

This is because, as I’ve mentioned here before, I’m a scaredy cat when it comes to horror, and fear is a central factor in Sunless Sea. So much so, in fact, that Terror is a game mechanic – arguably the most vital. The Terror of your crew rises when you leave light or sight of land – and the higher your Terror, the worse things that happen to you. If you don’t want to end up hallucinating murderous tentacles or deposed by your frantic crew, you need to be cautious, instead of simply striking out into the wide black yonder.

That is, if you can bring yourself not to. Though the game hinges upon darkness, there’s nothing dreary about the environment. Variegated islands glow in the vasty black, inviting exploration, each different to the last. The next update will implement map-shuffling, so before long those islands will migrate when you’re not looking, perennially refreshing the Unterzee’s mystique. The text-based story, inciting both wonder and profound unease, teases curiosity further. If you’re already a denizen of Fallen London, you’ll be pleased to hear that the choose-your-own-adventure style play has carried over enjoyably. Your choices, in Sunless Sea, have real and often surprising consequences.

Luckily for me, combat – currently only fully implemented with certain beasties and enemy ships – is straightforward. Bumping into an enemy pops up a combat display. Because the Unterzee is naturally lightless, battling other entities on it depends on illumination: yours and your enemy’s. As long as you keep an eye on both light levels and act accordingly, you ought to get on productively. Handily, combat is pausable, so there’s no reason the player shouldn’t always be able to act quicker off the mark than their enemy.

Even so, death is omnipresent on the Unterzee – not to mention permanent. Mutiny, shipwreck, starvation, madness – all threaten to prematurely end your character’s nautical adventures. And they will. Repeatedly. The Roguelike permadeath mechanic reinforces the ambience of danger lurking in the unknown. As long as you play in Unforgiving mode – according to the developers, how the game was meant to be experienced – there’s no loading your last save to redo that disastrous decision that got you killed.

Speaking of which – although I still find myself making basic strategic errors in sailing the Unterzee, not one of my seven dead captains (so far) has starved to death, or even had to consider nibbling on the infamous long pig for sustenance. Though ‘EAT YOUR CREW’ is part of the game’s tagline, getting to that point seems surprisingly difficult. Terror, on the other hand, rises alarmingly quickly out of sight of land and is nigh-impossible to get down again, especially once your nightmares get out of control. However, it’s likely that as the game nears completion and storylines and locations are added and improved upon, these mechanics will balance out.

As the game progresses, I look forward to more varied opening storylines and ambitions and more interesting legacies upon death, hopefully making my inevitable demise(s) less arm-gnawingly frustrating. Another promising-looking update currently slated for early August teases neutral vessels, a development which will serve to further flesh out the environment and open new opportunities for unique storylines. Unfortunately for Captain C. Moongood, seventh generation of zee-captains, I forsee many more hours of terrified zailing across Failbetter’s fathomless midnight ocean in my future – not to mention many more lonely and/or horrific deaths.

Buy Sunless Sea in early access now from Failbetter Games or on Steam. You can also read the Sightseer’s Guide to Sunless Sea for a glimpse of what awaits you in the briny abyss, or keep up to date with the game’s progress and other interesting material on the Failbetter blog.

My Top Ten Most Iconic Moments in Science Fiction and Fantasy