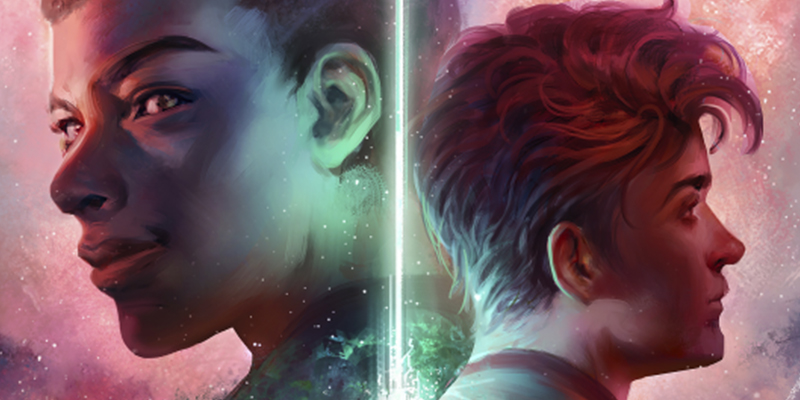 Gal Veres is Ettian Nassun’s best friend and longtime crush. But Gal Veres is secretly the heir to the bloodthirsty Umber Empire that years ago conquered Ettian’s homeworld and destroyed his life. When Gal’s life comes under threat by intra-empire manoeuvering, Ettian rescues him and they both go on the run outside the borders of Umber. Ettian is sure Gal will be a kind and just emperor, but is he willing to betray his own people and past to put Gal on the throne?

Romantic but not a romance

So Ettian is into Gal. Like, a lot. They’re best friends, they rely on one another, and Ettian is harbouring the most enormous crush. When Gal is threatened and Ettian has to make a choice, he sides with Gal against the universe, as if there were no other possible option (and for him, maybe, there never was).

And Gal? Turns out, Gal feels the same way. (This is hardly a spoiler.) They are each the most important person in each others’ lives, and—for a good chunk of the book—the only person, disregarding ancillary characters collected along the way. And there’s something… claustrophobic about that.

Ettian and Gal are so close as to be co-dependent. Although we don’t get to see the world from inside Gal’s head, Ettian spends half his time thinking about Gal—how he feels about Gal, how Gal might be feeling, what Gal will do next, etc. There were points when I wanted to reach through the page and shake him. And much as I wanted to like them both, this constant overwhelming worship of Gal and his needs made me irritated with Ettian and very much not inclined to like Gal.

Bonds of Brass is the first in a series, so although Ettian and Gal’s romance is a central thread, there’s no HEA here just yet. (Will there be? Who knows.)

Bonds of Brass leans hard into the fantasy part of science fantasy. In Skrutskie’s universe, empires make war and politics across star systems, led by hereditary rulers. Gal Veres is in fact Gal emp-Umber, heir to the warlike Umber Empire, son of its ruthless empress.

That heredity is a big deal in this book.

When Ettian and Gal escape across imperial borders, tough decisions need to be made. And in making them, Ettian begins to see a new side to Gal: a darker, more merciless side. Ettian wonders to himself if Gal, as his mother’s son, can ever truly be a bringer of peace like Ettian wants him to be.

This is one of a number of instances where the book touches on one of its main themes: so-called ‘bloodright’, AKA the hereditary right or inclination to something. Without spoiling the end of the book, Bonds of Brass hinges on this concept.

This theme really ties into the universe of ultra-nationalist empires. Empires, those vicious things, need the idea of heredity to justify their existence. Without a ruler’s right to commit atrocities, everyone is forced to confront the true injustice of the things done in the name of empire. Of course everyone in Bonds of Brass buys into the idea of bloodright—without it, all the struggle and loss would be pointless.

There’s another side to the theme of blood and heredity, and that’s where Ettian fits in. Ettian was 12 and living in the capital of the Archon Empire when it fell. Having lost everything, he had to do whatever it took to survive on the ruined streets. In the end, whatever it took turned out to be joining the Umber Academy to serve the empire that had destroyed his life.

Skrutskie has Ettian wrestle with his loyalties throughout the novel. He had purged himself of Archon sentiment in order to survive, throwing his loyalty behind Umber and, it turns out, Gal. When Archon rebels seek his help, he repeatedly denies and betrays them. But this gets harder.

The drums of Archon sing in Ettian’s heart. The question becomes: can he deny the call of his blood and remain loyal to his love Gal, in a real sense his coloniser?

In reality, the concept of bloodright is not a nice one. The idea of a destiny inherent in your very genes reinforces nationalism, classism, racism, all the evil brainworms you care to name. It’s a philosophy leant on by fascists since fascism in its current form emerged.

While it makes sense for this to be a prevailing idea in the grim universe Ettian and Gal live in, I feel like the work of dismantling the characters’ limited worldviews wasn’t pursued as far as it could have been. Getting out of the Umber Empire (and the former Archon Empire) should have been the chance for Ettian and Gal’s minds to have been blown, for them to question everything they had grown up believing. But their identities remain stubbornly intact. Will this change in future books? I hope so.

A dark beginning with little resolution

Bonds of Brass sets the stage for an epic space opera of clashing empires and star-crossed lovers, centering a queer romance between two men of colour. It sets up questions about the right to rule, how it’s possible to rule justly in an authoritarian empire, and how to live as a colonised person in the coloniser’s hegemony. Gal represents hereditary privilege; Ettian, hereditary loss and trauma. This is Romeo and Juliet, but with empires instead of houses on the line, and the real question is: can Ettian and Gal overcome their blood to be together?

That’s a question that isn’t answered yet. The lack of definitive progress on any of the main themes left me feeling frustrated, like this is only a part of a larger story, with no real arc of its own. Nevertheless, it’s a strong opener.

Bonds of Brass is out now from Del Rey.