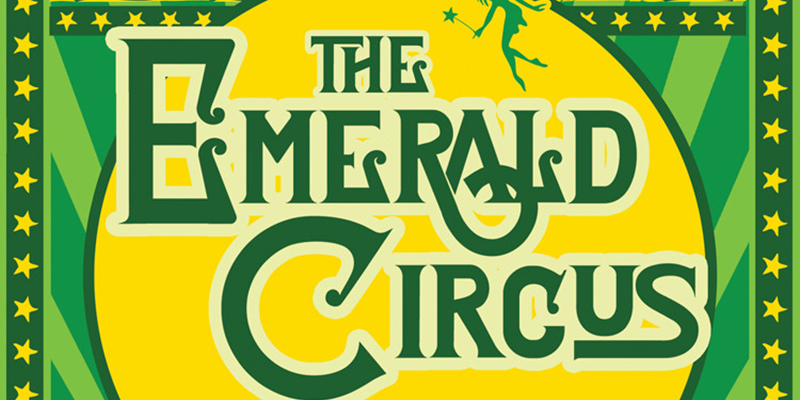 I’m ashamed to have to admit that before requesting The Emerald Circus, to review, I didn’t know who Jane Yolen was. I don’t know why, but she never entered my circle of consciousness, despite being a veteran of SFF, having been publishing for over 50 years, having won countless awards, and being known as ‘the Hans Christian Andersen of America’. So I’m grateful to Tachyon for publishing this remarkable short story collection and introducing me to Yolen’s work.

The Emerald Circus is a collection of a number of Yolen’s stories both previously published (from 1985 onward) and new, almost all of which are based on legends and fairytales or on history itself, as well as an appendix of Yolen’s notes on the stories, plus an original poem for each.

The title stems from ‘Blown Away’, the fourth story in the collection, which takes the story of Dorothy and twists it in a thoroughly weird (and queer) direction. Despite this, Alice (as in Wonderland) is the star of this collection, featuring in three of the stories in this collection. Yolen connects the two with a poem in which Dorothy and Alice take tea together, both of them a little lost outside of their respective adventures.

Alongside Wonderland, the other vein running through this book is Arthurian legend (two stories of which happen to be recounted by old monks, funnily enough). My favourite story in the book is one of these: ‘Evian Steel’, set on Ynis Evelonia in the river Tamor, where only women live and where they forge the finest swords known to man. I don’t want to spoil anyone, so just read it, okay? I’d rec this book on the basis of this story alone.

The collection closes with the Nebula Award-winning ‘Sister Emily’s Lightship’—in which Emily Dickinson gets to visit space. This story is so full of quiet tenderness that when I read in the story notes that Jane Yolen knows quite possibly more than anyone else about Dickinson I wasn’t at all surprised. In a way this story feels like a gift from Yolen to a beloved author, a woman who suffered much but kept outpouring so much beauty and understanding from her heart.

While I found it unusual, the story notes at the end of the book really helped me connect with Jane Yolen as an author after reading the rest of the collection. As my introduction to her, I enjoyed reading background detail on the stories in her own voice. As for the poems, I felt their inclusion adds another layer of adaptation to these stories which are already themselves transformative of their original tales, which is fun. Plus, I never complain about additional material when I enjoyed the main as much as I did this.

The common theme in Yolen’s stories is their humanity. She treats every character in her stories with respect—there’s not one side character in one story that is a cardboard cut-out or a joke. Even in ‘The Jewel in the Toad Queen’s Crown’, abhorrent little Queen Victoria and her designs of empire are somehow relatable, even magical, without ducking the reality of her unpleasantness and cruelty. (The only conceivable exception for me would be Morgan in ‘Evian Steel’, but given what we know about her I’d say she’s just been made more disturbing.) By this, Yolen lays out the truth of the world through myth and story, maybe the ultimate theme to this fascinating collection: nothing is simple.

What I Did This Summer (Instead of Writing Blog Posts)